Surprise attack on the British party

Usually I play on the French side, but as two British players were unable to participate in today's game, I fought alongside Redcoats. This was my first play againts my fellow (till now) allies and it was the very first game of our new British player Radek, who was nevertheless able to enlist almost 600 points of soldiers!

Our enemies used mainly Irregulars and Indians with a unit of 10 regular infantry. We haven't count them, but it was approximately 840 point!

French objective was to crush us totally. Our was simpler - just to reduce their numbers by 50%, then we win instantly.

Set up was as follow: Redcoats marched on the road, flanked by Irregulars and Indian allies. French could surround us any way they like. 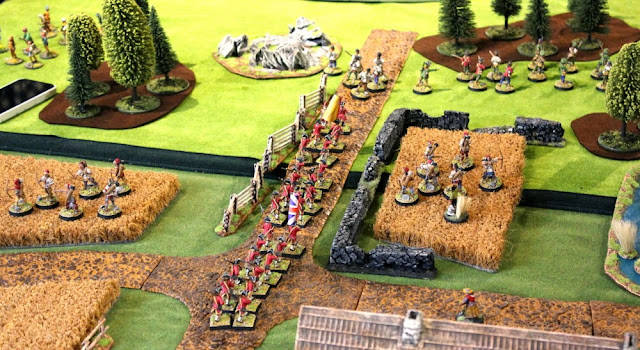 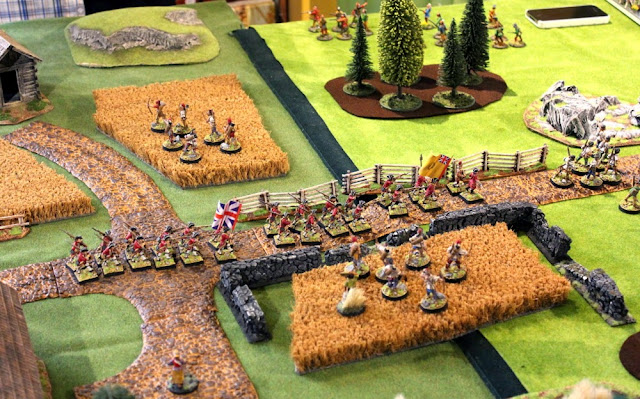 The game began. Our commander with his tactical genius was able to rearange few opening moves to our favour. On the left flank first volley from Redcoats annihilated one of Huron unit: half of them were killed, rest fled from the field. 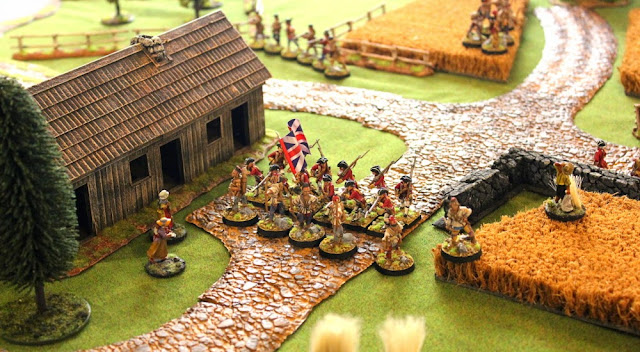 On the front Rangers realised they would be unable to capture abbandoned fort and tried to secure nearby forest - perfect position to shoot oncoming Compagnie Franches de la Marine and Regulars.

Unit of Marines has taken the Watchtower, but later fight were taken toward our positions, so this action was futile. Enemie's hesitation allowed us to took forest with Rangers. 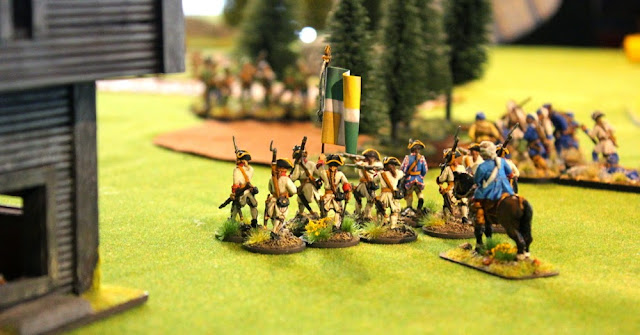 On the right flank our Indians started firefight with their kinsmen and forced their youngbloods to flee. In response Huron veteran warriors run in our direction with hope we won't be able to reload in time. 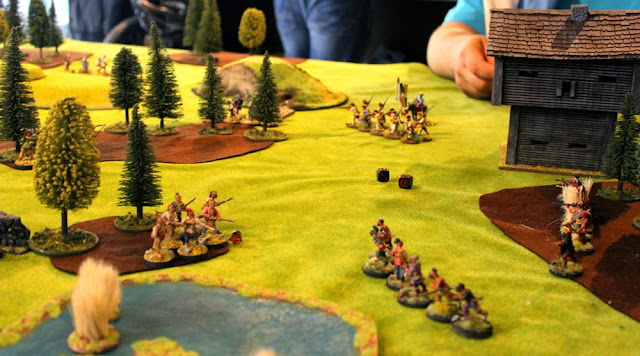 French line infantry and Marines on the hill started to threaten Ranger's position. We were outnumbered and bold moves of the French allied Indians meaned, Rangers wouldn't get aid. From the perspective, we should stay with them in the forest and defend it at all cost, screening the Redcoats.

Brave Mohakws with muskets were cought reloading their weapons and wiped out. Only few Rangers stand between bloodthirsty Indians and Redcoat's rear. 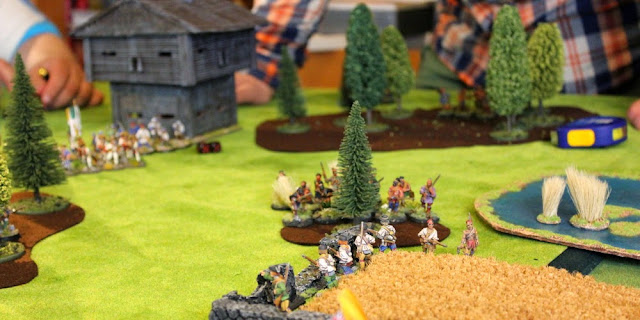 Unit of Indians approached bridge and were forced to recoil by accurate fire from light infantry, but reapeated assault. Our men didn't waste time for reloading and counterattacked with frightful result. Despite killing some redskins, they lost nerves and were hacked to pieces during chaotic retreat. Only one men stayed alive and he washed away the shame dueling with enemy warrior. 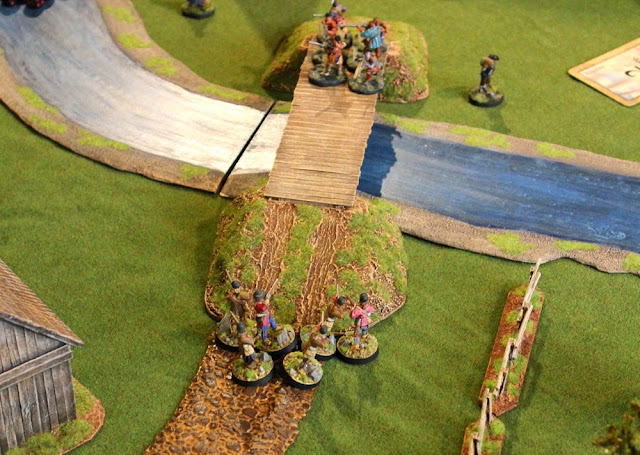 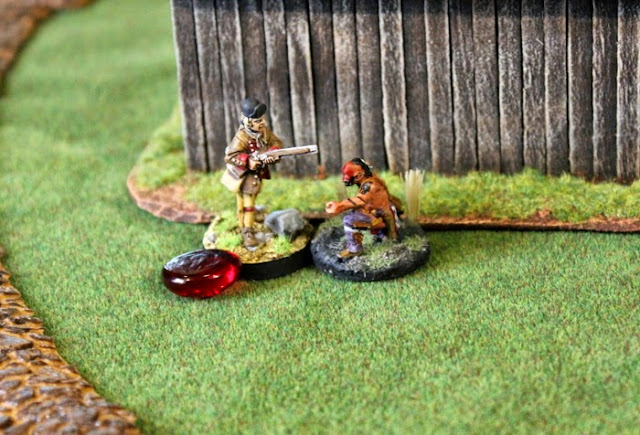 Indian warriors charged Rangers killing all of them. Next target was line infantry unit. Despite being attacked from flank Redcoats fought fiercely killing all foes, but losing almost half of the numbers. 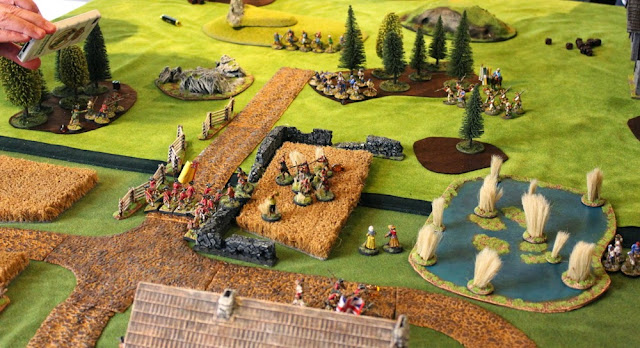 Second unit of Regulars was echanging fire with some Indians and Marines, but soon loses started to cripple it's effectiveness. Indians protecting their rear were soon swept away.

Soon after officer was shoot down and last of the Rangers unit decimated horrenously. Surrounded soldiers seeing haven't withstand mentally and scattered, running for their life. On the field of battle remains only exhausted Indians and quite fresh French Marines and Regulars. 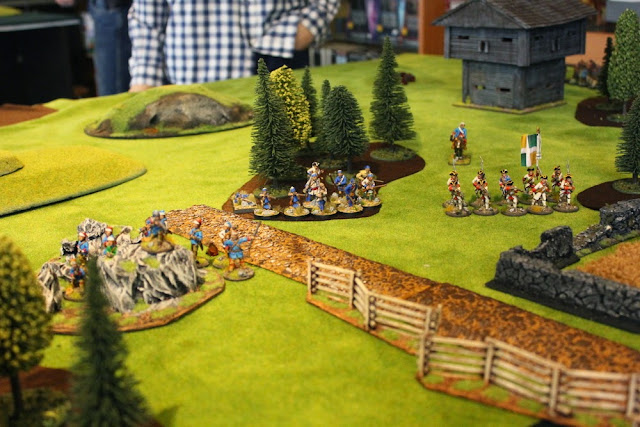 The game was pure joy. As Marcin said, it was play with the most manouvers, where Indian and Irregular units roamed battlefield running for each other.
And if you think, I've written this report with very british centered perspective, you are absolutely correct.
Posted by Kadzik at 18:31